“We hold these truths to be self-evident, that all men are created equal, that they are endowed by their Creator with certain unalienable Rights, that among these are Life, Liberty and the pursuit of Happiness.”

The Declaration of Independence
July 4, 1776

Laurie Halse Anderson on the inspiration for writing Chains

ABOUT THE BOOK
Set in 1776 at the beginning of the American Revolution, Isabel and her younger sister, Ruth, are robbed of the freedom granted them in Miss Mary Finch’s will. The girls are forced to leave Rhode Island when they are sold to a cruel and ruthless Loyalist family from New York. As the war between the Tories and the Patriots escalates in a city divided in its loyalties, Isabel’s personal battles grow. Madam Lockton, the wife of the new owner, is spooked by Ruth’s fits and sends her away. Isabel is abused and branded for disobedience. And Curzon, the boy who convinces Isabel that the only way to freedom is to become a spy for the rebels, is captured and thrown in prison. Feeling lonely and desperate, Isabel is faced with a difficult question: Should she work for or against the British? When Isabel searches deep within her soul for the answer, she makes a life-changing discovery — she is loyal only to herself. Thus begins her real journey in the pursuit of freedom and happiness.

PRE-READING
The Declaration of Independence was adopted on July 4, 1776. What did our forefathers mean by the phrase “Life, Liberty, and the pursuit of Happiness?” Think about these words as Isabel’s story unfolds

Timeline and map for Chains 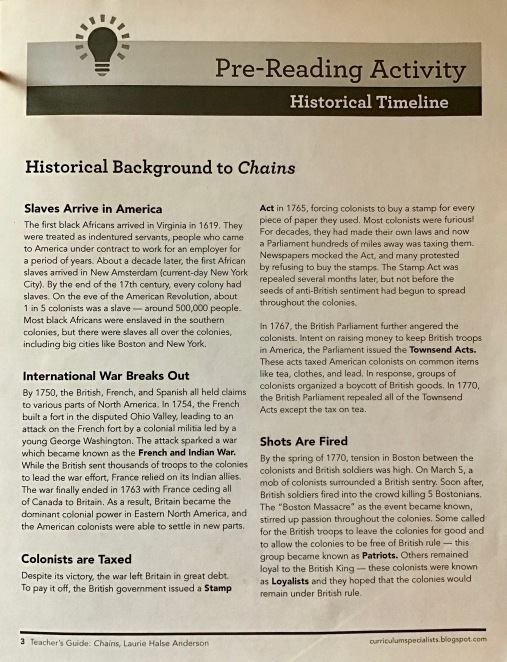 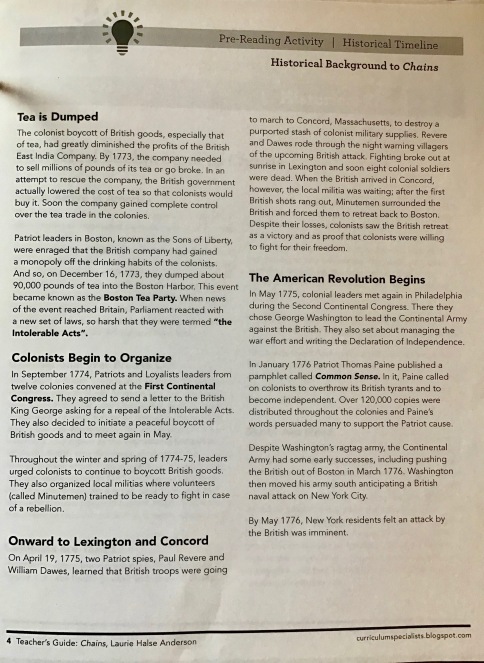 While we are reading we will use the following resources:

Calendar and reading schedule and list of vocabulary words

All Men Are Created Equal

Laurie Halse Anderson on her inspiration for writing Chains

Read through this timeline from the 1619 Project : A New American Timeline ; then, answer these questions with a partner. Be as specific as possible.

Race: The Power of an Illusion documentary (episode 2 – about the Declaration of Independence and race)
The evolution of race in the United States

P&G advertisement about “the Talk”

Pulitzer Center and 1619 Project for teachers